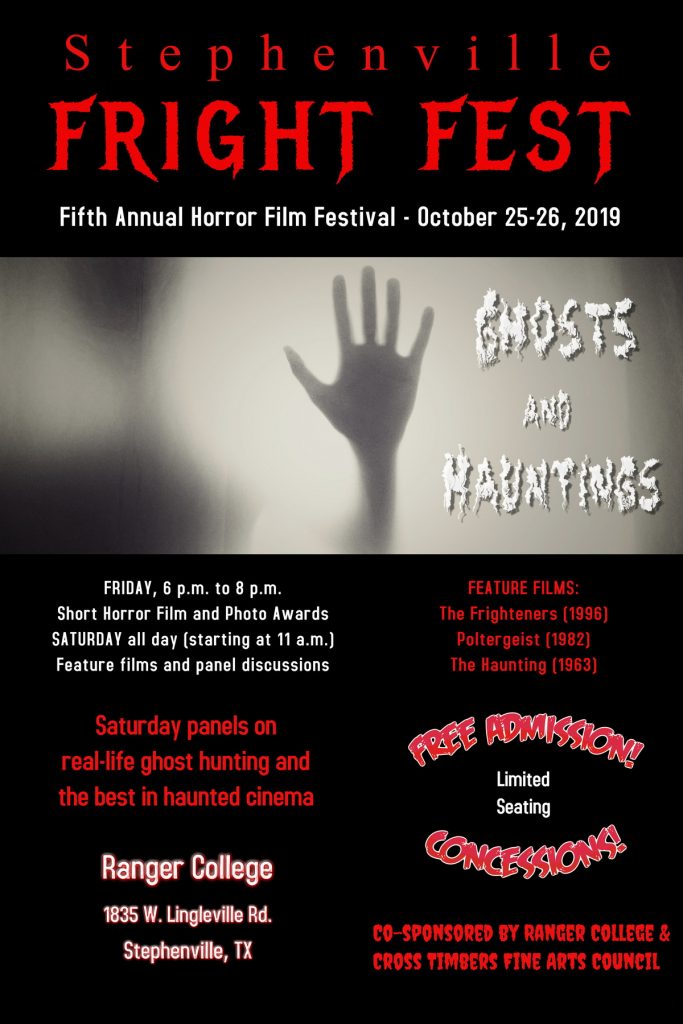 Stephenville Fright Fest is an annual horror film and multimedia festival located in Stephenville, Texas, and jointly sponsored by Ranger College and the Cross Timbers Fine Arts Council. Originally titled “Stephenville Frights,” the festival was founded in 2015 as an annual venue for screening feature-length horror films accompanied by lectures and discussions focused on a specific annual theme. For the inaugural year, the theme was “Possession and Exorcism.” In subsequent years the festival explored themes of “Monsters,” “Nature Horror,” and “Psychological Horror.”

The event is organized and run by Dr. Matt Cardin of Ranger College and Ms. Whitney Lee of of the Cross Timbers Fine Arts Council. Ms. Lee is the CTFAC’s Executive Director. Dr. Cardin is Ranger College’s Vice President of Accreditation and Institutional Effectiveness. He is also an author and editor of fiction and nonfiction on the combined subjects of religion and horror, as well as an expert on the scholarly study of the paranormal who edited/created the academic encyclopedia Ghosts, Spirits, and Psychics: The Paranormal from Alchemy to Zombies.

ADMISSION IS FREE BUT SPACE IS LIMITED!
Please register to ensure your spot.

Theme for 2019: GHOSTS AND HAUNTINGS

For the 2019 festival, we turn our focus to the theme of ghosts, specters, supernatural revenants, and hauntings. We’ll be screening three classic feature films in this horror subgenre. For the festival’s contest portion, there are two divisions, films and photography.

SHORT FILM CONTEST: Interested filmmakers are invited to submit short horror films (15 minutes and under) that relate in some central, substantial way to the presiding theme.

All submissions for both divisions require a $25 submission fee and are required to follow the official rules.

SUBMISSION DEADLINE for both categories is September 30. Entrants will be notified regarding acceptance or non-acceptance of their work by no later than October 10.

On Saturday, screenings of three significant feature films in the ghosts-and-hauntings subgenre will be held, with each film highlighting the specific trope of paranormal investigation as a central element. These screenings will be accompanied by brief introductory lectures, post-viewing Q&A sessions, and two panel discussions featuring local and regional experts on paranormal and supernatural matters.

ADMISSION IS FREE BUT SPACE IS LIMITED!
Please register to ensure your spot.

Notification deadline: All entrants will be notified about acceptance or non-acceptance of their work for the festival by no later than October 10.