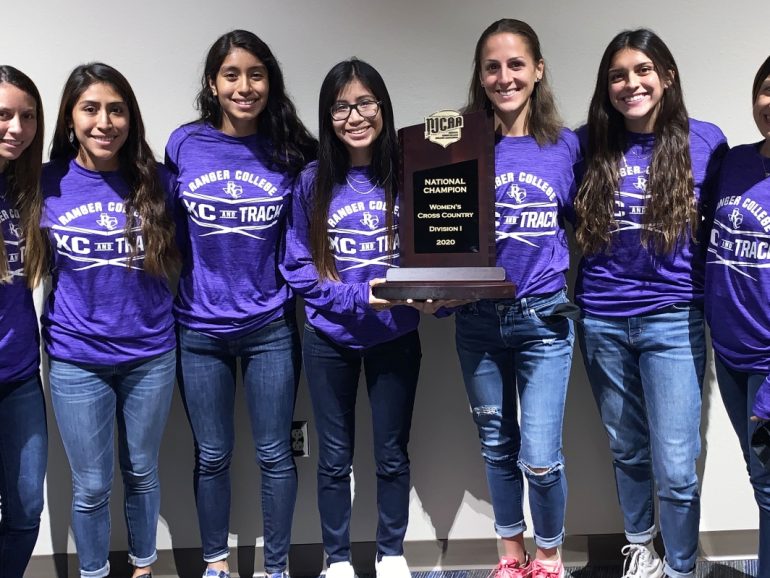 Heading into the 2020 NJCAA National Cross-Country Championships on Saturday morning, Ranger College head coach Kathy Graham and RC Assistant Coach Alfonso Rangel told their team the best way to make history was to not for anyone to finish first in the individual standings. Rather, they preached, it was for them to put as many runners between the first Cloud County Community College runner and their second fastest runner.

The strategy worked to perfection on a cold and windy day in Fort Dodge, Iowa, on Saturday. Ranger had five runners finish in the top 22 spots and powered its way to its first-ever national championship in cross country.

“Honestly, I don’t know what to say,” said RC Graham. “Coach Rangel had done the stats on the other teams and said based on the times he saw, we had a chance to do well. We told them (their runners) if we could pack enough of our girls between them (Cloud County’s first two finishers) we could do well.”

Sophomores Jessica Thomas-Billot and Natali Mireles and freshman Alexa Reyes made the dream possible. They all legged out spots in the top 13. From there, Aylin Huerta and Kaylyn DeLaRosa did the rest. The two outraced Cloud County’s Lufjenie Mondesir to the finish line, giving RC all it would need to eke out a win in the team standings. Ranger finished the meet with 75 points and edged out Cloud by one point. Defending national champion Iowa Western was sixth, finishing behind Southern Idaho, Colby Community College and Dodge City Community College.

“I’m so pleased with the way we ran,” said Graham. “This was always in them to do, they just had to make it happen. This is an awesome team. They decided they wanted this and then went out and did it.”

Iowa Western’s Faith Chepengat garnered the top honors in the individual standings. She legged out a time of 18 minutes, 10.90 seconds. Cloud County’s Patricia Koma was second at 18:46.16.

Once Koma had finished, the Lady Rangers made their presence felt. Thomas-Billot scampered across the finish line eighth overall. The French sensation, who had been one of the most dominant runners in Region V this season, finished the 3.1-mile race with a time of 19:20.44.

Cloud County added to its hopes with 14th- and 15th-place finish from Kya Johnson and Maryse Mbenoun.