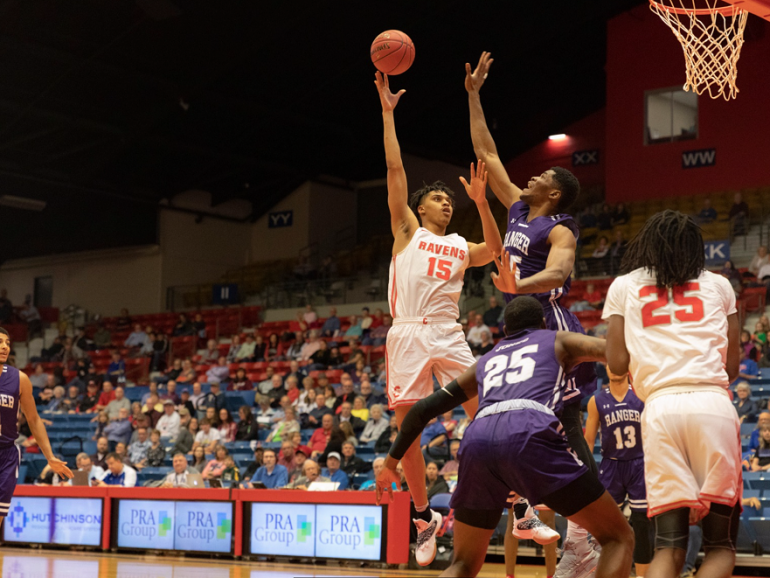 When Billy Gillispie signed on to become the head coach and athletic director at Ranger College four years ago, he vowed to create a program that people would be proud of. On a cool Saturday afternoon in the heart of the Sunflower State in March, he made good on that promise by leading the Rangers to their first-ever appearance in the championship game at the NJCAA national tournament.

And he did it in the first-ever nationally televised game.

Playing in front of a large crowd, Ranger College capped a sensational 2018-19 season on March 23 by capturing the national runner-up honors in Hutchinson, Kansas.

The runner-up honors were almost even better. Vincennes University withstood a torrid second-half comeback by the Rangers to escape the Hutchinson Sports Arena with a shaky 87-77 victory in the NJCAA Division I championship game. Ranger cut a 22-point deficit in the first half to just two with 4:39 left to play.

“I’m going to say what I was told by an old coach I had,” said Gillispie, who has guided RC to a pair of trips to the national tournament. “We didn’t get beat. We just ran out of time. I think that applies to this team and the way we played.”

Ranger College threatened to steal the victory in the first 15 minutes of the second half. The Rangers, who went 0-5 from three-point range in the first 20 minutes, reeled off a 36-22 run in the initial 15:21 of the second half and pulled to within two. Brayan Au buried a three from the right wing with 4:39 left in regulation to finish the run and cut the Vincennes lead to two, at 72-70.

Moments later, after Craig Porter had pushed the Trailblazer lead to four with a short jumper that rattled home, Caleb Asberry breathed excitement into the large RC crowd on hand by taking an alley-oop pass at the rim by Au and turned it into a behind-the-head dunk.

Unfortunately for Ranger, Vincennes weathered the storm. The Trailblazers put RC on its heels moments later when Keith Clemons drained a trey from the top of the key. Clemons’ second three-point shot of the game – and Vincennes’ 10th overall – sparked a 7-2 run that gave Vincennes an 81-74 advantage. The Trailblazers then went 6-for-8 from the free throw line in the final 1:08 to close out its fourth national title.

Trailing by 16 at the half, Jonathan Jackson and sophomore Keyshaad Dixon put the Rangers on their shoulder at the start of the second half. The two combined for three straight baskets to open the frame and quickly helped RC trim Vincennes’ lead to 10, at 40-30.

Coryon Mason helped the Rangers turn up the intensity moments later. He ignited a 14-2 run by RC midway through the second by muscling up a hook shot in the paint.

Au took over from there. The freshman reeled off the Rangers’ next seven points and pulled Ranger to within seven, at 58-51 with 12:17 left.

After Dixon had buried a trey, Mason cut Vincennes’ lead to just three, at 63-60, at the 7:28 mark by laying in a shot. Less than two minutes later, Au hit from behind the three-point arc and pulled RC to within two.

As a team, Ranger College outplayed Vincennes in the second half. The Rangers, keyed by an outstanding night from the free throw line, sank 15 of their 28 shots from the floor in the final 20 minutes. As a team, RC buried 21 of its 27 free throw opportunities, including 12 of their first 13 tries.

As hot as Ranger was in the second, the Trailblazers were even hotter in the first. Vincennes University shot a staggering 64 percent from the floor in the initial half – including 8-of-10 from three-point land – and built a huge lead. The Trailblazers led by as many as 22 points midway through the first half.

Jaren English, one of eight Ranger players who would later sign Division I basketball scholarships, gave Ranger the first laugh of the contest. Just seconds into the championship bout, he broke free and jammed home a dunk that put the Rangers up 2-0. Kevin Osawe inflated the lead to 22 with a three-point shot with 7:07 left in the half.

Osawe, the player of the game, scored 17 of his 22 points in the first half.

Jackson led all RC scorers by throwing in 21 points. Mason added 16, while English and Au added 13 and 12.

With the victory, Vincennes won its first national title since 1972 and ran its season record to 34-3.